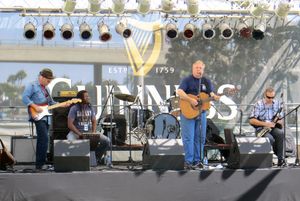 The Ne'er Duwels: (L to R) Bryan Dobbs, Forrest Robinson, Ken O'Malley and Pat D'Arcy
(photo: Jack Pin)
Who are the Ne'er Duwels?
The "real deal" from Ireland, Ken O’Malley's rich, resonant voice and engaging stage presence have delighted audiences for over thirty years. "He holds nothing back. Whether singing a passionate ballad, playing a solo on the mandolin, or explaining the gloriously sad history of Erin his homeland, Ken O’Malley is all-in, wide open to the world, and as true as an arrow’s flight. Ken’s fine tenor voice could carry him through a show all alone, but he backs himself beautifully on guitar and mandolin. . . .His wonderful wit and good humor draw us in and carry us along, and the beauty of his songs, both traditional and original, fills us with irresistible joy."

He leads the Ne’er Duwels, a formidable ensemble of Irish musicians, stepping both back and forward with their eclectic blend of traditional Irish and contemporary sounds.

Joining him onstage: Patrick D'Arcy, also from Dublin, is one of the finest uilleann pipers in the United States. Patrick has toured extensively with many well known artists throughout the world and is also a talented pennywhistle and bodhran player. An expert on the culture and history of the Irish pipes, he is a much sought after teacher and consultant; his work has been featured in many film, television and live theatre productions.

The “sound” of the Ne’er Duwels: Bryan Dobbs, is originally from New Mexico. Whether accompanying on the mandolin, the acoustic guitar or the very creative, innovative sounds of his Fender Stratocaster, Bryan adds the mysterious, the romantic and the attack that takes the band back to the days of the band Planxty in Ireland or traverses the musical spectrum with the world techno sounds of the present and future.

Grammy award winning percussionist Forrest Robinson provides the heartbeat of the ensemble. An alumni of the University of Tennessee at Chattanooga, Forrest has traveled the world to perform with such artists as India Arie, Victor Wooten, Arrested Development, TLC and many others.  A lover of Celtic music and rhythms, Forrest is thrilled to be able to use his versatile talent with The Ne'er Duwels.