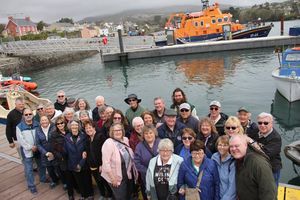 Ken's 2019 tour included a wonderful group from Butte, Montana visiting the lands of their forebears, the copper mines of the Beara Peninsula in West Cork and touring on up the West Coast to Co. Mayo. Click here to read Ken's blog with a daily report of his 2019 Wild Atlantic Way tour: KEN'S 2019 TOUR BLOG

The 2022 tour begins and ends at Dublin Airport on Saturday, April 16, 2022 and ends on April 25.  The tour includes 3 nights in Bantry, Co. Cork, 1 night in Galway, Co. Galway, 3 nights in Westport, Co. Mayo and 2 nights in Dublin, Co. Dublin. Cost is $2,800 per person. (Sharing a room, Double or Twin) and $3,200 per person. (Single - LIMITED AVAILABILITY). Included: 9 nights Hotels, Breakfast and Dinner, Luxury Coach, Porterage, Meal gratuity. Not Included: Air travel, Lunches, Driver gratuity and Travel Insurance. For more information, see me at a show, email me at ken@kenomalley.com, or fill out the contact form just below the photos. 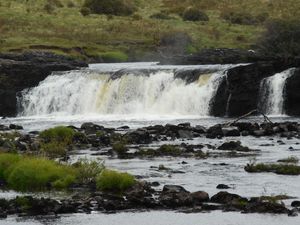 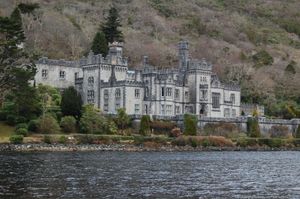 April 16. Arriving from USA. Landing in Ireland earlier and staying beyond April 25, is of course an option and I will be happy to assist anyone with questions or arrangements.

April 16. Allowing for everyone to arrive in Dublin Airport around 9am or earlier, we will board our luxury coach and drive southwest to Bantry Bay in West Cork. It will be a nice drive and we will make comfort stops and enjoy the beautiful scenery. Our first three nights will be in the Maritime Hotel in the town of Bantry, where we will be greeted by a welcome committee when we arrive.

April 17. Our first morning in Bantry, after a full Irish breakfast, we will drive to Castletownbere and be greeted by the locals who will welcome all of us. We will visit Dunboy Castle, last stand against the English of the O’Sullivan Beres in 1601. Right next to the castle is the Puxley Mansion which I will talk about on site. We might have lunch at Dzogchen Beara, the Buddhist Meditation   Center nearby, where the vistas and cliff views are breath taking. Enjoying a nice relaxing day around town we will meet many new friends who will show us true Irish hospitality. I am still organizing events in West Cork, so will keep you all posted.

April 18. We will take a drive to the other side of the Beara Peninsula and visit the Mizen Head Visitor Center, managed by my cousin Stephen O’Sullivan. It was once a lighthouse and the most south westerly point of Ireland. This whole area we are visiting is breathtaking and still unknown to most tourists. Our tour will take us on to the town of Skibbereen, the central market town in West Cork. Thousands of people sought refuge from the famine here, in the 1840’s and many of them died from starvation. An Gorta Mór, The Great Hunger, is recognized as one of the greatest disasters in19th century Europe. We will visit the Famine graveyard outside of the town

April 19. Day four will see us leave the southwest and drive north through Killarney, in Co. Kerry. On up through the picturesque town of Adair in Co. Limerick, crossing the River Shannon and arrive for lunch at the magnificent Cliffs of Moher in Co. Clare, definitely Ireland’s Wonder of the World. We will drive through the town of Lahinch, famous for its awesome golf links course, and the location for the excellent Irish drama series on Peacock TV “Smother”.  A short drive on will bring us into the medieval Galway, City of the Tribes. We will overnight at the Victoria Hotel in the town center and enjoy the local pubs and entertainment.

April 20. After breakfast, our tour will take us out along the shores of Galway Bay to the native Gaelic speaking region of Connemara. The barren landscape is dotted by lakes and rivers and stonewalls that go on forever. The magnificent Twelve Bens mountain range rises above us as we make our way to Kylemore Abbey for lunch. The abbey, originally built as a country home for an Englishman in 1867, took one hundred men four years to build. We will drive on through the wilderness into Co. Mayo. Our third stop is the beautiful town of Westport, where my father grew up. Often regarded as the best place to live in Ireland, it is renowned for its charm and history. Built to house the workers on the local landlord’s estate in 1780, the town was architecturally designed and even the river was rerouted through the center of town. Sitting on the edge of Clew Bay, the town is known for its deep sea angling, traditional music, and some fine restaurants. We will be at the West-port Plaza Hotel which has a wonderful spa and swimming pool should an-yone wish to avail.

April 21. Our first morning in Westport, we will drive to Ballintubber Abbey, founded in 1216. The abbey has an incredible history and despite many efforts to destroy it throughout the centuries by Henry VIII, Queen Elizabeth I and Oliver Cromwell, it never stopped serving the people and masses were said always. Restored completely in 1966, the 750th anniversary of its founding, one can still attend mass there daily. Afterwards, we will return to Westport for a relaxing day around town.

April 22. Our tour today will take us northwest through the town of Newport and out to Achill Island, onto which we may drive. Until the 1960ʼs one had to wait for low tide to cross to the island, now we have a bridge. It’s the largest of the islands around Ireland and has some of the most sea ravaged scenery anywhere in the country. On our drive around we will visit the old Famine Village, a collection of a dozen or more stone cottage ruins abandoned in the 1840ʼs.

April 23. Our final destination, the capital City of Dublin awaits as we drive east to the other side of Ireland. It’s about a three hour drive and we hope to stop and visit Kilmainham Gaol as we enter the city. Reopened in 1966 on the 50th Anniversary of the 1916 Easter Rising, it is one of our countryʼs most solemn and historical destinations. Within days of the Irish surrender, fourteen of the Rebellion’s leaders were executed here under martial law, with no fair trial. The leaders expected no mercy and gave their lives for Irish freedom. After our visit we will check into the Clayton Hotel in the lovely area of Ballsbridge. The rest of the afternoon is free to explore the city.

April 24. The final day of our tour will be for the group to amble around the city, to go off explore, shop, and just relax in Dublinʼs Fair City. There are many interesting sites to visit around town, a good way to see them is the “Hop On, Hop Off” bus tours. We will plan a nice party in the evening with some terrific music with dinner.

April 25. Our tour coach will escort those who are leaving Ireland to the air-port and will depart the hotel around 9am. At this point we will not make that a hard departure time, we will check everyone’s outbound US flights and do our best to accommodate as many as possible in the group.

Thank you for allowing me to share my Ireland with all of you, I feel sure you will all feel a sense of belonging many times throughout the trip. This is your Ireland.

Note: Because of the Covid situation, site visits etc. are subject to change.

"Going to Ireland on one of Ken O'Malley's tours is a far more moving and captivating experience than any typical trip to the Emerald Isle.  As any fan of Ken knows, he embodies everything he sings about--and all of his songs are richly filled with his whole heart and soul.  Ireland comes alive on one of Ken's trips as it never could on other tours--for he lives and breathes the land as he gives you his word's-eye-view of all his favorite sights.  Seeing Ireland through the eyes of a deeply passionate man who was born and raised there makes all the difference....every town, or road, or church, or graveyard becomes something unforgettably beautiful, painful, boisterous, amusing, sorrowful....all because you live each step of the journey with a man whose very blood is made up of the rivers of his homeland." M.D.

"A Ken O'Malley tour feels like a family affair. not your typical bus caravan from one tourist trap to another. Rather, a return with Ken to the places he loved when he lived here. Hearing, directly from him, the history and his own personal impressions of the sites we visited made for a memorable tour of this beautiful country." L.R. and J.R. (three time tour guests with Ken O'Malley)

"This is my third trip to Ireland. All have been with bands and fans. I have enjoyed this trip with Ken O'Malley the most. It was like touring Ireland with family. We visited sites that the other tours did not. John Costelloe was an excellent local guide as well. I would definitely recommend a trip to Ireland with Ken O'Malley to anyone who is interested in seeing more than just pubs and tourist attractions." A.M.

"We had a fantastic time.  Call it 'The Luck of the Irish" if you will. I wanted to connect with our family's Irish roots and sought out a tour that wasn't the usual.  We wanted a genuine experience with genuine people, not the large overpowering and out of control generic tours that we found again and again through large and corporate travel agents. Fortunately, going to the internet and finding this small, unique and genuine adventure sounded exactly what I wanted for my daughter and myself to be comfortable and fulfilled. The small, music based experience, appealed to us and the cost and itinerary matched or exceeded any other we could find. We were not disappointed! Ken O'Malley and his friends, are genuine people. Not knowing anyone soon was lost in the welcoming and warm group that met us at the airport in Dublin. We will never forget the Irish hospitality and the fantastic experience and friends we found on this tour." J.N. and L.N. (Chicago)

"This is our third trip to Ireland and second with Ken. Even so, there was so much new to see. The experience was immeasurably richer with Ken's music" S.W.

"Our second trip to Ireland and it was definitively the best yet." J.P., D.P. and G.P.

"We loved the trip. I just wish there was more time! We loved all the stops we made and we loved hearing Ken the most." J.R. and S.R.

"Ken O'Malley's tours of Ireland are different from other tours in that he takes great pride in bringing people to his homeland and making them feel at home.  He goes to different places than many of the other tours;  one example is Clare Island just off Westport to see one the castles owned by pirate queen Grace O'Malley, whom he proudly claims as an ancestor.  Through it all, Ken shares his vast knowledge of Irish history and brings to life the tales told in traditional Irish ballads.  His performances while on the tour are at small, intimate locations, and make the entire group feel like family.  I would highly recommend any of his tours as you may come a stranger, but will leave as a friend." D.T.